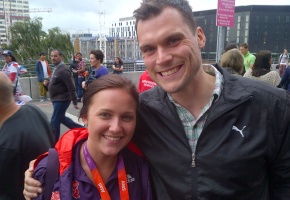 A regular, and very easy, debate to spark as a broadcaster in the last 8 weeks is ‘so, who’s going to be the BBC’s Sports Personality then’

Mo Farah, Jessica Ennis, Bradley Wiggins, Sir Chris Hoy, Ellie Simmonds and David Weir are all names which will rightly be discussed over an overpriced pint of poison around the country in the coming weeks – which in itself does wonderful things for what some class ‘minority sports’ but I have an alternative candidate for it, also, I love the fact that the footballing world will rightly stand and applaud the dedication and humility shown by some of the class of 2012 and not feature in the top 10 let alone on the podium.

Now the BBC enjoys celebrating outstanding achievement, so…. how about a place for the Games Makers? I’m not suggesting they get placed into a category to win anything but some presence on the night would be fitting for me.

On the day that London hung its head in shame on the 1st anniversary of the riots which embarrassed the nation, there were up to 70,000 volunteers smiling on the streets of London asking whether they can help. Getting the crowds going with a sing song, some decent banter but most of all they were the best advert for our country. The pressure was on, all eyes on grumpy old London with the G4S saga in danger of dripping all over the Opening Ceremony but the Games Makers really did make the games, if you didn’t experience them, just trust me.

Imagine THE best customer service you’ve ever had and then remember they were getting paid, inside and working a ‘normal shift’ – the Games Makers worked some ridiculous hours, I saw tens of them asleep on the tube and remember accommodation wasn’t provided , plenty of favours called in for an overnight stay with mates. They worked a total of 8 million volunteer hours as a team.

They were everything from the people at the tube station directing us, keeping the waiting time in queues easier with a sing along, scanning tickets, pointing you in the right direction, assisting the athletes with anything they needed, they were the unsung heroes  of the London 2012 Olympic Games for me.

The Games Makers were trained to have a ‘can do’ attitude and oh how they delivered. It was customer service as it should be. How we dream when the retail ‘assistant’ looks down their nose at you when you ask where the butter is.

Clearly in my position I couldn’t be seen to be advising the BBC on who should and should be up for special recognition at Sports Personality of the Year 2012. I do have a suggestion if they need these sporting SUPERSTARS to be shown to their seats, forced to get a smile on and bring some colour to the evening.

I must have stopped 100 Games Makers whilst in London and uttered these words, the same simple phrase every time “thank you for making the games” – I always got a smile back.