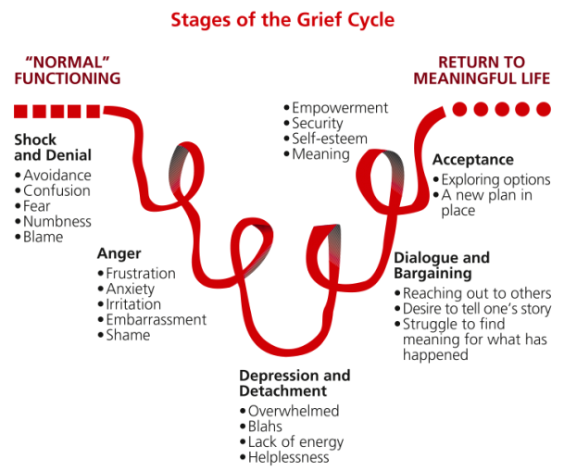 A grief cycle. I’ve gone backwards for a while on this and then forwards.

“Are you ok?” I was asked by so many people on Sunday 28th October 2018. In the sunshine. The paradox in the UK of the cold and bright sunshine set against a perfect blue sky, what I imagine the top of ski slopes are like. On that day though we were wading through grief as a stadium, as a city even as a sport. 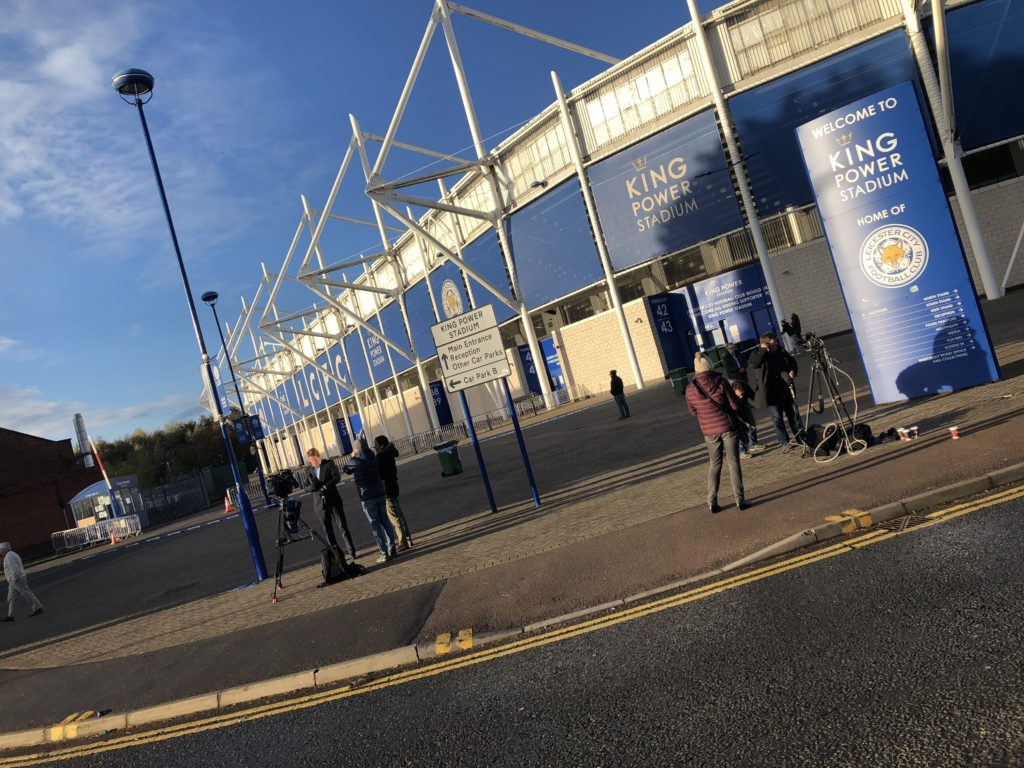 I’d answered “yeh I’m ok” until one person down there replied to my stock answer and rocked me with this, “it’s ok to not be ok you know” – and that was the first moment I had that I was allowed to open the doors to my own emotions. I’m not educated in the subject enough to know how emotions seep out and what can trigger them.

We’d all lost a hero, the man who gave us the dream we hadn’t dreamt. In the city of Leicester as children we didn’t dream of seeing the team we call our own win the Premier League, because that was never a possibility. The FA Cup, yes, the league? Don’t be silly, that’s impossible. It was until we were introduced to The Possible Man, Khun Vichai. 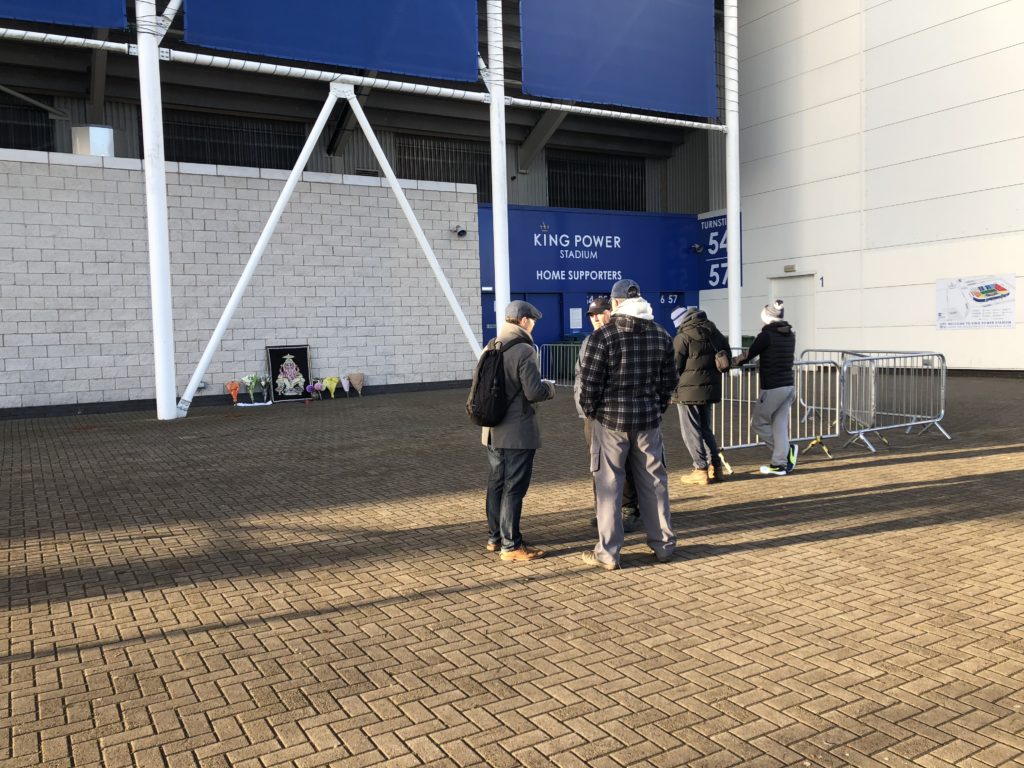 A kind man, a man who’s beliefs of humility, dignity and humanity permeated from the boardroom down to the lads that clean Jamie Vardy’s boots. None of us were really aware of our own cycle of grief that we were about to go through. It felt like we’d lost a family member, in many ways we had.

Vichai had become part of our family and not just on a matchday. By giving so much to our city, we know about the financial gifts to fans and the hospitals and university but what about the gestures and visits we don’t know about? The help and support he gave The Birch after his medical struggle, allowing families to use the stadium for funerals without charge when he heard of their losses. Handing gifts to people on a matchday, just be to be nice, he was like everybody’s favourite uncle, closer than some family members. 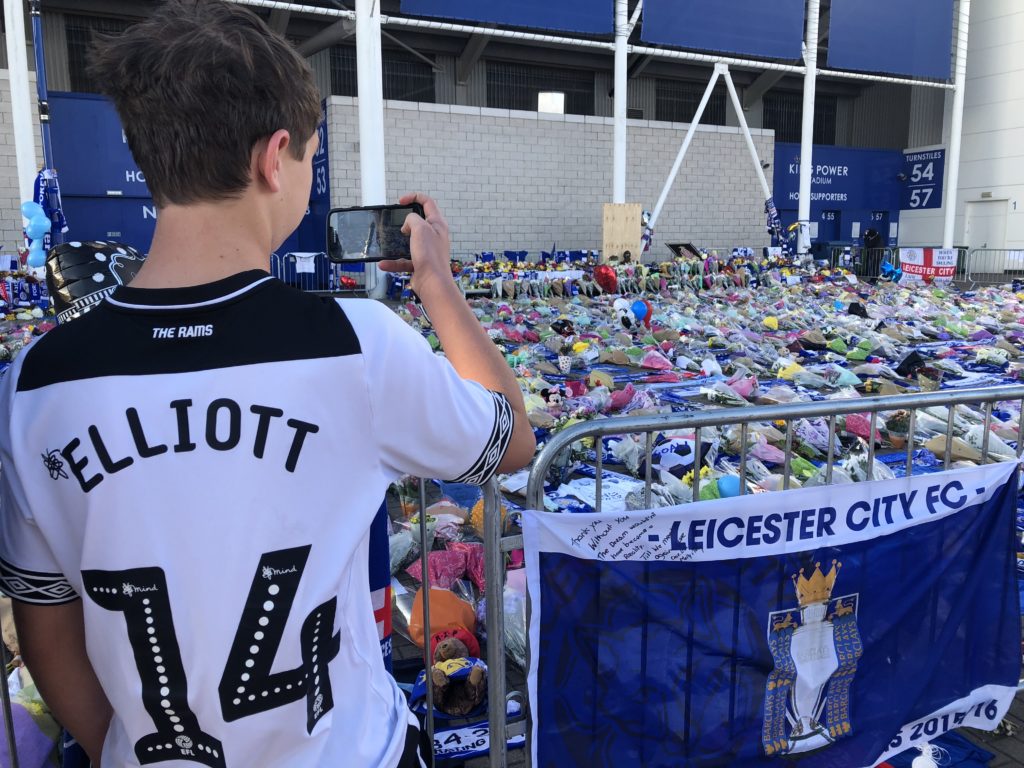 “It’s ok to not be ok you know” – that person was smart, broke through my bravado, ‘reporter must be strong and crack on’ face. I started wobbling but learnt that that was part of the process and that was ok.

One of the toughest parts for me was watching Khun Top miss his Dad, his hero, the man who was guiding him through life by the hand. Just being in their company in Thailand a couple of times and in and around the stadium you could see that, Top followed, listened and learnt from his father. In an instant he had to cope with a massive loss.

A son losing a parent is tough.

A very kind man called Nick Hodges called me – Nick founded a charity following the tragic loss of his son to help families who have sadly lost children, The Bodie Hodges Foundation – Nick called and was very sincere in expressing his condolences to everybody at the club. He offered a word of warning/advice “grief can draw on previous grief mate, this may bring back some of the grief of losing your Mum” – I hadn’t even thought about that and he was right. In a very different way given the circumstances of their passing and the relationships we had with the losses of our parents, he was right, this was dragging back the finite nature of death. I’d lost my Mum just 18 months before and wondered how Khun Top was feeling. Nick helped me on my grief cycle in that sometimes you go backwards and this could be a trigger, he was right. 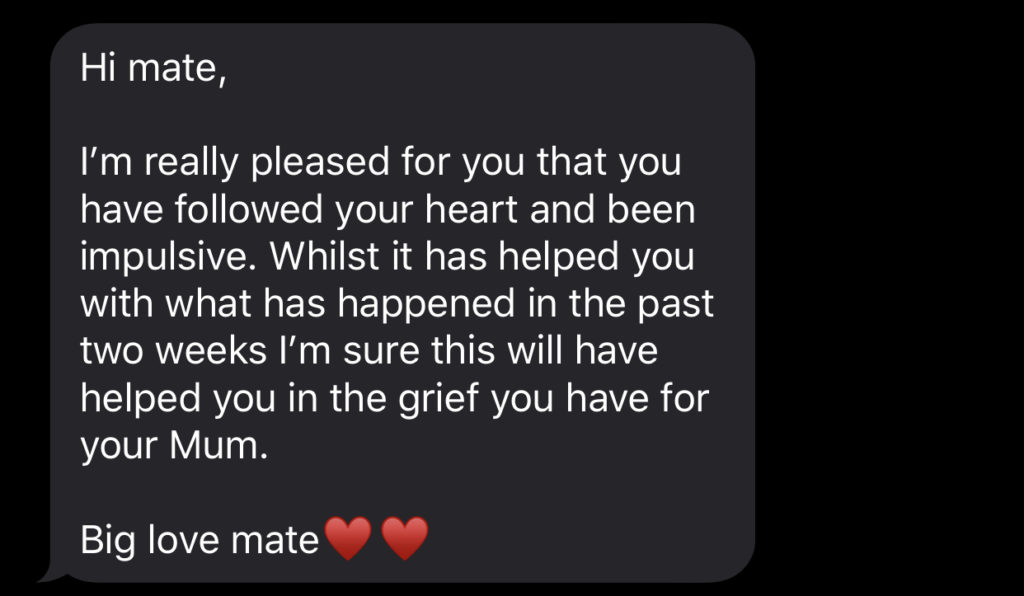 It’s ok to not be ok and none of us were ok, we gathered as a collective outside of what was (and is to some) our church, on a cold Sunday morning, it was a quiet and heart wrenching service but we gathered as a collective, as a group, as people who love this city, football club and human examples of kindness. Looking at the flowers, looking into the sky, awaiting news, hoping that there could be some, just a bit of good news. We couldn’t grieve until we knew, our grief cycle was stuck but what did we do? We got together.

I have some stand out memories from Sunday 28th October 2018. A 12/13 year old lad was stood in his football kit at about 1pm, boots, shin pads, the lot. He was with a parent/carer and stared at the floral tributes, mud still on his knees as he’d enjoyed the game we all love. Could have been a Foxes fan, probably revelled with us all when the club won the league, I could tell he wasn’t ok. We all offered hugs and pats on the back. 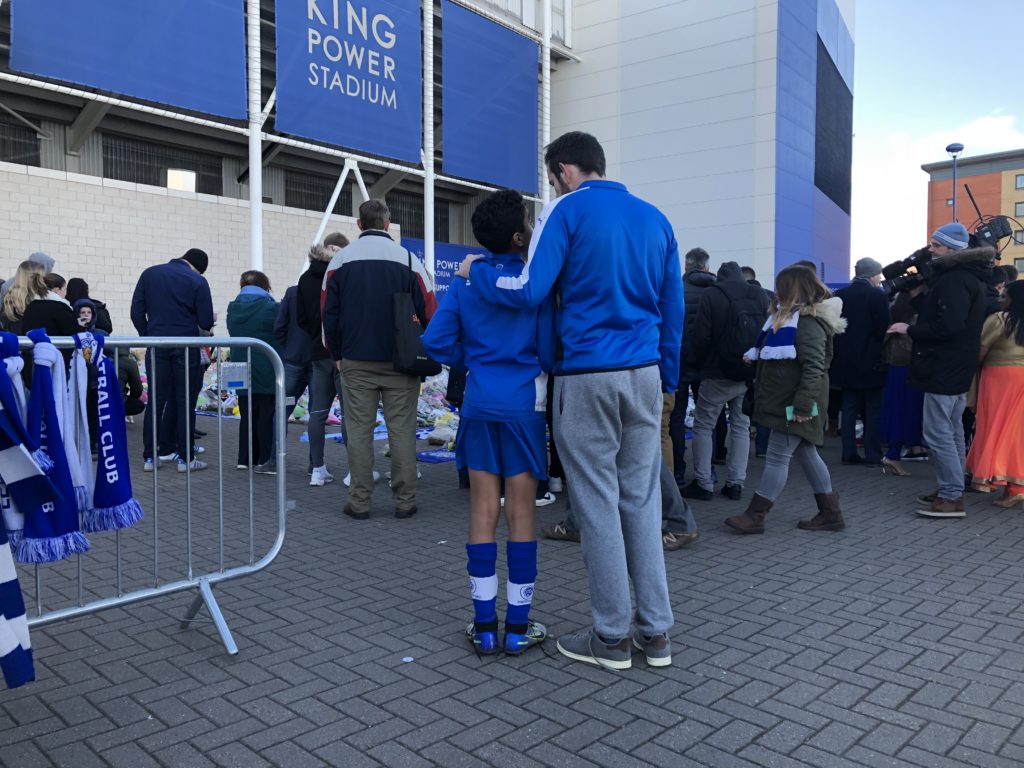 In the year since there will have been times that we’ve not been ok, that could be in a footballing sense or in life, work, play, family, anything. A lasting legacy for me from that day was the knowledge that it’s ok to not be ok, forgive yourself for not being ok and know that it can and will get better with some help and support from others whether that’s professionals, family or close friends.

If when you see Khun Vichai wave to the crowd at the end of that touching montage before every Foxes game you well up, that’s ok, it’s grief, it’s happiness and sadness in the same second and that is all ok. Be kind to yourself, especially when anniversaries like this come along.

I really hope Khun Top is able to deal with his grief which he’s likely to carry forever and you may too, somebody told me that you learn to carry grief it and never get over it, that’s ok too. 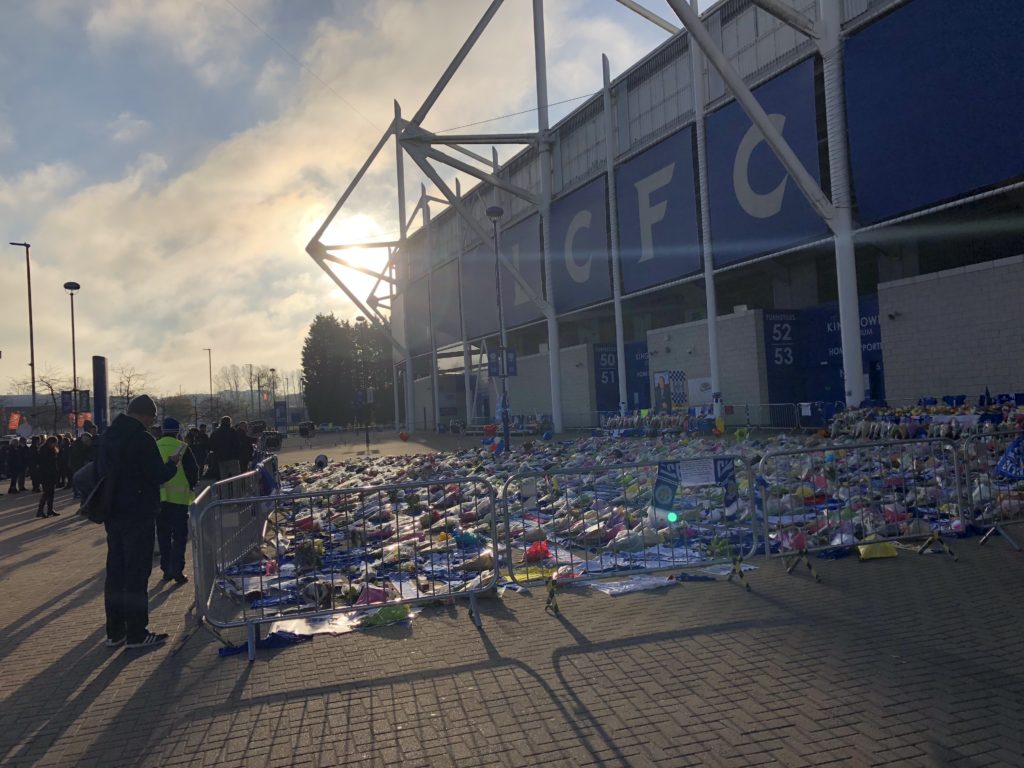 I believe he had a laugh at our expense and caused the rain to fall during the first Walk for Vichai in 2018 en route to the stadium, then his smile was the rainbow that followed. He will have wanted us to smile when we do especially collectively as a club but also understood that we miss a man who is special to us all.

Remember fondly but also allow sadness to come if it does in loss, that’s what’s helped me in the last 3 years since losing my Mum. Know that the sadness will recede and maybe allow recovery to come, slowly.

5 people died in the helicopter that tragic night, may they all rest in peace. The families and friends of those who passed will be somewhere on their own grief cycle and I hope they feel the support we’re all sending at times like this.